“Set several years after the events of Django Unchained, Django/Zorro finds Django again pursuing the evil that men do in his role as a bounty hunter.”   – Dynamite 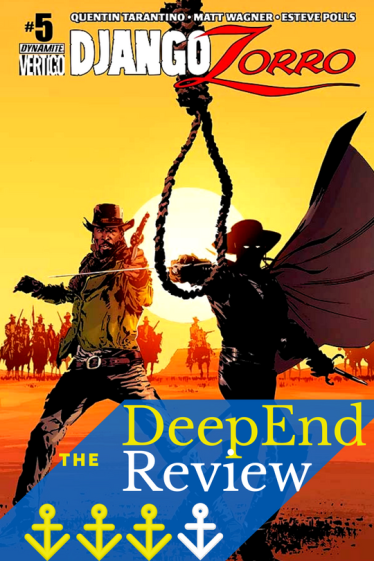 This graphic novel is the only comic book follow-up to a Quentin Tarantino film and represents a creative collaboration between the Oscar winning director and artist/writer/creator Matt Wagner. It’s also an epic crossover with the legend Zorro, Don Diego de la Vega…aged and somewhat changed in this timeline from his Antonio Banderas film portrayal.

The story swells as if it were up on the big screen even without having the benefit of a specially selected Quentin Tarantino soundtrack, but if you’re into that kind of thing, their are plenty of fan attempts on YouTube. A suggested playlist is also a nice feature of David Walker and Bilquis Evely’s
Shaft run for Dynamite. They printed lists at the end of every issue.

Django meets Don Diego de la Vega while still working as a bounty hunter. Impressed with Django’s skills at dispatching unsavory men that try to rob him, Diego hires him as his bodyguard. Having seen the man’s stunning ability with a sword, Django doesn’t believe the man needs a bodyguard. Django is sure everyone has secrets and motives and he doesn’t know this rich and uncalloused Don Diego from a cactus, but a couple of Django’s motives are freedom & money and as such he accepts Diego’s offer and embarks on a journey with him to thwart the schemes of a man known as the “Archduke of Arizona.”

There are some slightly rough transitions in tone between the two writers, but it doesn’t kill the story. As the plot unfolds, some veils are pulled and some swapped. Django realizes from the start that Don de la Vega is not racist or lacking substance, but his ease at consorting with such men is astonishing to him. Little does he know about the legend of The Fox!

To stop the evil machinations of the Archduke, Zorro has concocted a tricky plan. Django knows bad men. Calvin Candie was as villainous as they come, but as Don de la Vega explains the depth and scope of the Archduke’s schemes, Django realizes that the Archduke is smarter than Candie was and much more corrupt. This makes Django want to hastily rid the earth of him, but Diego assures him that a web of such deceit need be cut away and unweaved, not just blown and blasted with bullets. Can they reconcile both their tactics to combine their enduring fights for justice into a force like the world has never seen before?

DJANGO/ZORRO IS A DYNAMITE ®TITLE. All books, titles, characters, character names, slogans, logos and related marks are ™ and © their respective owners. IMAGES FEATURED UNDER FAIR USE FOR REVIEW PURPOSES.

Featured image is an illustration by Abel Su