This is a re-print from Image Comics and one of the first things you will notice about this graphic novel is that the art is done by Charlie Adlard (@CharlieAdlard) , artist of The Walking Dead, and that the technique of the art is a high-end style charcoal/chalk on grey paper. Adlard’s art “style” is paired nicely with this technique. Also, the technique lends well to the snowy landscape that is the backdrop of this peek into WWI at the Italian front. Who is the writer? Robbie Morrison (@robbiegmorrison), writer of Dr. Who. He packs in drama, irony, and even a bit of humor in a way that leaves an impression. I will be looking for more of his work.

I watched the televised version of The Walking Dead before ever having glanced at the comic books and I enjoyed the show immensely.

I was a bit hesitant to read any of the comics because, and I’m a little ashamed to admit, they were not in color. Yes. It bothered me even though I realized that the black and white frames were probably the best choice for illustrating a zombie apocalypse. I just couldn’t handle it at the time, but I could see why the comics had so much ammo for a show. The characters were too lively not to be brought to life.

“Of all the projects I’ve worked on, White Death is quite possibly the one that remains closest to my heart.” – Robbie Morrison 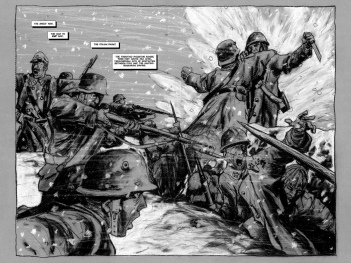 The story of the White Death is perfect as a graphic novel. The symmetry of the story and even the opening verses the closing frames leave you with one clear message: soldiers in war are all different people, but they are not unique.

Regardless of which side they fight for, all soldiers are but replaceable and minute gears in the greater mechanism of War. The first frames show snow blowing away to reveal a fallen soldier. All that is left of that soldier is a skeleton in a helmet and uniform. It is the Great War to end all wars, World War I, and we are at the Italian front during the 5th battle of the Alighieri Plateau on Halloween 1916. We see men engaged in close combat using knives, guns, and bayonets. Reinforcements arrive at the trenches, ready to report to Lieutenant Tevani, but Lieutenant Tevani is no more. They are informed to report to Acting Lieutenant Orsini. Orsini gets their papers and tells them what’s what. Our focal character is among the group; Pietro Aquasanta. We continue the story of the battle and awaiting battle through Pietro’s perspective mostly.

Another character of note is Alberto Diaz; there are quotes in the comic from a book that the real Diaz wrote. It’s called White Death: War in the Trentino. The coming days break some men’s sense of humanity and unearths some men’s treacherous survival instinct. Some realize that their own one-of-a-kind knack for survival has now been weaponized and the realization is disheartening …that is when there is time to think about it. The treachery is angering and sometimes shocking. Alberto suffers a devastating loss in the comic that causes him to feel like he has lost his identity and it is one of the most heart-wrenching parts of the story.

Morrison presents no lag or overly perplexing plot elements. The story moves along. There are date and location tags. You can tell that Morrison and Adlard work well together as the art and the narrative of White Death is executed in a way that makes the reader appreciate the nuances of each. I felt that the characters had a surprising amount of depth for the short span of the book. This is the case especially with Acting Lieutenant Costanzo Orsini. He has a few monologues that really let the reader inside his addled and war-weary mind. At one point he actually says, “This is Orsini’s Front…”, like a power-hungry maniac, but at another point he goes on about how he struggles to serve the greater good of all the men and spare them from more suffering than necessary to be a soldier. His inner conflict is actually believable. So, I couldn’t just hate Orsini or even blame him for all the “merda” that ensues.

I have seen some say that the lettering was hard to read, and I wonder if they read a digital version of the book or a hard copy. I read the digital version, and I did have to do a bit of maneuvering to be able to see the whole frame and read it, but I struggle with any digital comic that I have to read without comixology’s guided view. This is why I will be purchasing the graphic novel to add to my collection. It’s too good not to hold.

I received this book from NetGalley and the publisher in exchange for a fair and honest review. This review is not for pay and is my opinion alone.